The BHA National Dialogues Officer Jeremy Rodell gave  a 'fact packed' talk at a joint event of Windsor Humanists and the Slough Faith Partnership on 9th Februrary 2016 about the major changes taking place in our religion and belief landscape in the UK and globally.

The non-religious are becoming the majority, while within the diverse religious minority, Anglicanism was in decline, and non-denominational Christianity and various forms of Islam were growing. There were significant challenges to making this pluralism work, including, fear of “The Other”, ill-informed generalisations, declining institutions defending privileges and genuine conflicting values all leading to polarisation and lack of social cohesion.

Jeremy proposed three responses. First explain and promote Secularism – which he defined as a level playing field where the state is neutral, ie freedom for and from religion, with no group privileged over others i.e. a level playing field. Second Educate children properly about religions and beliefs, including non-religious views such as Humanism.  Third “Humanise” our view of others as fellow humans, and seek genuine dialogue as opposed to adversarial debate, taking care to avoid false assumptions and generalisations, while recognising both areas of common ground, and areas of real difference and accept that there will always be areas of “Red Lines” and disagreement.

As a last word, Jeremy suggested there were three possible outcomes for a plural society: 1. People leading separate parallel lives, with little real interaction, 2. Assimilation, which seems to be the aim in France, 3. A typically British messy integration, which academics refer to as “ interculturalism”.

A lively debate ensued on the meaning of faith, belief, faith schools, atheism and the purpose of dialogue which was brought to a close at 9pm and continued informally over a drink or two afterwards!

Living With Difference, Report of the Commission on Religion & Belief in British Public Life under Baroness Butler-Sloss - press the image below to link to the full report at - http://www.woolf.cam.ac.uk/uploads/Living%20with%20Difference.pdf

The Future of Religion in the UK - link provided below right, jst click on the images.

Jeremy’s full presentation below which provides more information on the BHA Dialogue with Others Campaign which Windsor Humanists are supporting in 2016. 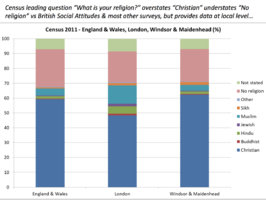 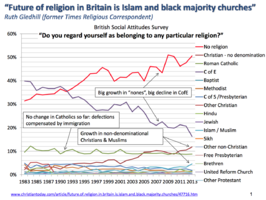 Future of Relgion in the UK - Link

Want to join us?

If you'd like to become a member, please use our contact form. Or just turn up at an event - you will be very welcome!  Or contact us via our email windsor@humanistgroups.org.uk

Join our Facebook Group page - the link is provided below.